Home
Schütz then and now
His work and us

His work and us

Schütz and us. Sagittarius, a sonic biography

New sounds, exotic scents, a sense of the spaciousness and openness of a globalized culture – the youthful Heinrich Schütztook this all in as he studied in Venice with Giovanni Gabrielli thanks to the patronage of the Landgrave Moritz of Hesse-Kassel.
The extroverted and sprawling “Italian Madrigals” were the result. And they serve as the aesthetic foundation on which all subsequent activity stands. 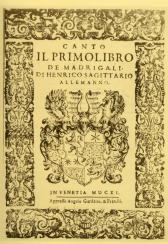 In 1617, Schütz wasable for the first time to experience the extensive duties that were expected of him as the new “Chur S. Capellmeistern” in Dresden, as he set the visit of the Holy Roman Emperor Matthias to music. [The "Cantionessacrae" from 1625 can be viewed as part of this official function]. Additionally,he was obliged to develop the festivities for the 100th anniversary of Martin Luther’s Reformation in October, 1617. This festivity was at the same time used as a demonstration of might on the eve of the Thirty Years’ War. Some of the “Psalms of David” of 1619 were composed for these festivities.
And there was something else to celebrate: in 1619 Schütz married “the beautiful Wildeckin”, MagdelenaWildeck. As the date for the title page of the “Psalms of David”, he chose the date of his wedding.

The Thirty Years’ War changed the consciousness of Europe: Death occurred on an individual level [a crowning example of a work used to commemorate an individual’s death was the Funeral Massof 1635/36],as well as through mass killings. In 1636, the war entered a more powerful phase. In the Battle of Wittstock, despite having had a better starting position, the allied imperial and Saxon armies were defeated by Sweden. With this victory, the Swedish warring factions resumed fighting, and the war was prolonged for twelve years. The events that unfolded during the battle were described by witnesses as being unspeakably shocking and brutal.
The “Small Sacred Concerts I” paid tribute to the toll enacted by the ravages of war,Heinrich Schütz lamented: “Singers, of which there is the greatest shortage”, as he created a cycle of works for only a few voices and basso continuo. Suffering, hope, and consolation are the emotional pillars of this epochal collection of works.

This was something that had not been heard in war-torn Europe for over three decades. Such tonal opulence paired with eloquent musical expression and an almost vehement confidence had not been encountered by the people in Dresden, Saxony, and Central Germany since the “Psalms of David”: The “Symphoniaesacrae III” are documents ofa renewed cultural blossoming, and represent the sum of Schütz’s creative output. This is particularly apparent given that Schütz requested to be released from his professional duties directly after their composition. Schütz was occupied throughout 1650 with thoughts of his legacy, the ordering of his works, and striving for a withdrawal from professional obligations.
Johannes Brahms probably also recognized the “Symphoniaesacrae III” as a pioneering work cycle, he performed a part of it in Vienna in his symphony concerts. “Saul, was verfolgst du mich” [“Saul, why do you persecute me?”] appealed most of all to Brahms. 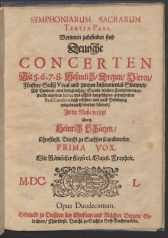 The “Twelve Sacred Songs” possibly offer a concrete view into Schütz’s pedagogical methods and how the everyday life of the choir singer was shaped. The works are “drafted in a time of leisure”, and served as counterpoint studies, as material for the discussion of scoring and other related issues. Or they accompanied prominent moments of the day, as shown in the "Benedicitevordem Essen"
[“Blessing before the Meal”] or the"Deogratiasnachdem Essen"
[“Thanksgiving after the Meal”]. Even today, these songs can be heard at the boarding school of the DresdenKreuzchor at mealtimes, as well as at so many dining tables at apartments and houses throughout Central Germany.

Between the poly-choral “Symphoniaesacrae”, and the three late Passions lies a process of bidding farewell: Schütz withdraws from Dresden and takes up residence with his sister, also elderly, in Weißenfels. He complains of health problem and delves in Bible study. Musically, his late works display an internalization and reduction of means. However, this simply leads to an intensification of expression: the single word, a single interval, or a succinctly formulated musical scene become remarkable elements in the Passions of Luke, John, and Matthew (and also the “Swan Song”). Heinrich Schütz creates an external barrenness, in which an emotional and spiritual wealth lurks beneath the surface. He transcends the Baroque, Classical, and Romantic eras, to an aesthetic of late Franz Liszt leading eventually to John Cage or Morton Feldman. An aesthetic of reduction emerges in which the single tone becomes emancipated.